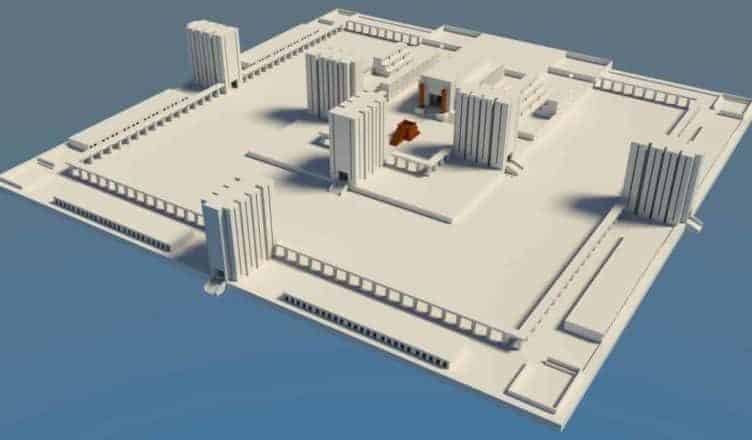 During the time of the children of Israel’s captivity in Babylon, God appeared to the prophet Ezekiel and showed him a new temple. In Ezekiel 40-48, this temple is described in detail. God even showed Ezekiel the exact dimensions of this temple. The master builder of this temple is Christ. He appeared to Ezekiel to show him how the temple should be built:

“He took me there, and behold, there was a man whose appearance was like the appearance of bronze. He had a line of flax and a measuring rod in his hand, and he stood in the gateway.”

Christ appeared to Ezekiel as a man of bronze. In the book of Revelation, John also saw that Jesus’ feet were made of bronze.

In the Bible, bronze signifies judgment. Christ appearing as a man of bronze shows us that judgment is always associated with the person of Jesus Christ. So what does Christ need to judge today? Everything that does not correspond to God’s holy nature, especially as it pertains to the temple of God. The church is the temple of God today and God does not accept anything in the church that does not correspond to His holy nature.

Today, there is often a tendency among Christians to bring worldly things and methods such as music, money, the honoring of man, entertainment and much more into the church. But Jesus does not accept anything in His church that does not correspond to God’s nature. We can see this in Ephesians 5:27:

“that He might present her to Himself a glorious church, not having spot or wrinkle or any such thing, but that she should be holy and without blemish.”

Building According to God’s Standard

In Ezekiel 40:3 it goes on to say that Christ was holding a line of flax and a measuring rod in His hand. In the following verses, we see that HE measured the temple with these things. This shows that the temple must be built exactly according to God’s measurements. The temple cannot be built according to human imagination. Unfortunately, however, this is often exactly what God’s people are doing today. Everyone works on God’s temple as he pleases and does whatever is right in his own eyes. Therefore, God admonished His people through Ezekiel:

“Son of man, describe the temple to the house of Israel, that they may be ashamed of their iniquities; and let them measure the pattern.”

This word also applies to us as Christians today. Christ must be the standard in the church. He lives in us and we must be ready to learn to do everything through Him. This also means that we cannot simply start or form a church as we please. Everything we do in the church must be according to God’s standard and measurements. The Word of God and the Spirit dwelling in us must guide us in this. But first, we need a heart that is willing to repent of all the conventional ways in us that do not correspond to God!

May we be such people!